I’ve had a small break on the Blog as you can see. Had to really. I was just going to say ‘been too busy’, I didn’t because I normally hate to hear people say that when half the time it just isn’t true.

But I really have been occupied – including trying to control some people’s replies here. Its not that I haven’t got a sense of humour, but people like Cat and Craig (yes, and you Barbara!) and others can go ‘over the top’ sometimes if you don’t intervene. Having said that, I do have a lot of sympathy for all the people Bonky and his associate tried to harm in the note so distant past. And they are still doing it, only I seem to be the ‘top of the list’ today. What is ultra ironic, is that both these people pursue their obsession while hiding behind a ‘religious cloak’ in an attempt to justify themselves. You know, using God as some kind of ‘personal avenger’ who is out to ‘do their will’! I am not a confirmed Christian as such, but if that is ‘Christianity’, you can keep it! Luckily, I happen to know its not. God does not set out to ‘punish’ people. And the only ‘person’ that inevitably ‘punishes’ wrong-doers, is themselves.

That, my friends, is one of the main principes of Mystical Law, whatever religion denomination people happen to fall under. Whether they be Church goers, Pagans, Wiccans, Jews or Moslims, or simply atheists; this applies to everyone. Evil always punishes itself in the end. God has nothing to do with it. Neither does the so-called ‘devil’ in fact. The only ‘devil’ there is – or ever was – is the activity of the human mind. No operative human mind – no devil. It really is as simple as that!

Talking of the ‘human mind’: by now some of you may have heard – even saved -the radio interview I gave for Steve Genier’s Nocturnal Frequency Radio on April 2nd. Well, the station also has a Forum and a home-page advertising the shows and where people can post. Need I say it! The poor guy has been subjected to a load of malicious posts about myself from a person not even mentioned on the Show! And not only that, but the person is using aliases to make these posts (one rather stupid one that comes to mind is ‘vampireologist – now where have we heard that before!??) and, needles to say, has now been banned from that Forum. (It must be running into dozens upon dozens of Forums by now!). It’s the usual ‘cut and pasted’ drivel about myself; basically only because (as I said on the Show) I simply don’t accept the existence of ‘blood-sucking vampires’.

The Church has believed in these for ages is his stock reply. Well, I’ve got news for you ‘bonky boy’: if you are talking about barbarous Church doctrines from the past, you may have a point. But then the Early Church also believed in ‘witches’ in their literal sense and believed it was right to torture these and burn them at the stake (all in the name of ‘God’, of course).

But I would have thought the Church has moved on from then. Nobody I know in the modern Church (with the exception of just one or two cranks) accepts the existence of literal Christopher-Lee-type vampires that can be destroyed by being ‘staked through the heart’. Grow up, for God’s sake! (And anybody else who lends their support to this barbaric belief).

The Church does, of course, recognise the existence of ‘evil spirits’ (and even employs exorcists to sometimes deal with these) but bloody ‘vampires’. ‘no’. You should have been born at the time of the bloody Inquisitions. You and Matthew Hopkins would have got on well – persecuting, torturing and executing ‘witches’ or other ‘unbelievers’. And you would have had a free licence to do it then!

On to other matters: I saw Gareth last night and we did a lot of work sorting out Court documents for my chapter for my 1974 trial at the Old Bailey. Looks as if it might run into two long chapters – there’s so much of it. It was very tedious, but we had some wine to help us work so not that bad.. Time went quickly, in fact; though there’s still loads more to do yet. There’s the Trial and then the prison experiences, including the hunger strike (“Pity he never died” as one ‘Christian’ lady was later to remark), and then onto to deal with life after 1976 (or mid ‘76’). Still, I’ll get there (sorry Gareth, should have said ‘we’!). Always do in the end.

So with that good people, I will leave you. Have to go out for a bit in the lovely sun, then more work when I get back. 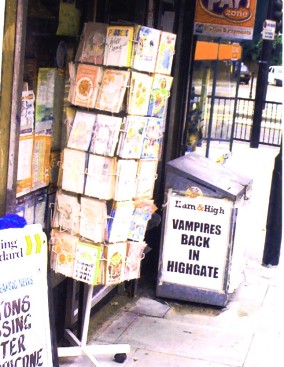